This special issue has its origins in a two-part workshop entitled “Dying Well”, held in November and December 2015 at the Centre for Bioethics of the Chinese University of Hong Kong (CUHK), where numerous scholars and practitioners from Hong Kong and four other countries presented. Rather than simply publish workshop proceedings, it was decided to publish articles based on a selection of presentations that focused specifically on philosophical questions raised by advance directives and euthanasia/assisted suicide. To these, a spirited debate on paid organ donation was added. This debate, which was not part of the “Dying Well” workshop, also took place at CUHK in November 2015. Finally, a case commentary was included from a workshop by a physician with the CUHK Centre for Bioethics on the existential and spiritual challenges raised by caring for terminally ill patients.

This issue is also available via Project Muse: https://muse.jhu.edu/issue/34294/print.

From 2008 until 2016, the Asian Bioethics Review was published by NUS Press. The articles from this period can be downloaded freely from the NUS Scholar Bank via the links provided below: simply click on the title of the article you would like to read. They can also be accessed via Project Muse and ProQuest. 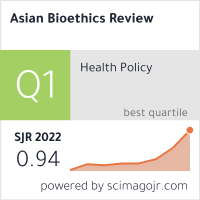 CENTRES or ‘Clinical Ethics Network + Research Ethics Support’ is a networking and training platform to enhance capabilities in ethics committees work in Singapore.

SHAPES or ‘Science, Health and Policy-relevant Ethics in Singapore’ develops bioethics capability in biotechnology and research and provides advice to policy-makers, government agencies, and other stakeholders.

CBmE Journal Club and Lunchtime Seminars is a space to connect; to feature, learn, and play with ideas in bioethics.